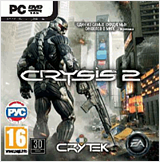 The sale of this product is suspended.

keyper information about the seller and his items
offlineAsk a question

Continuation of one of the best fighters in the history of interactive entertainment.

On Earth descended a series of natural disasters, and mankind was on the verge of death. Moreover, the aliens have returned, obsessed with the idea of \u200b\u200bcomplete destruction of the Earth's civilization, and the first thing attempted to wipe out the planet's largest and most important city - New York.

Megapolis turned into hell: the streets are awash with creepy strangers, among the millions of citizens at an incredible rate spread terrible disease. The buildings were in ruins, which devours a ruthless fire. Neither paramilitary forces to maintain order nor the US Army is unable to cope with the crisis and give a fitting rebuff to the aggressors. Anyone who decides to stay in town, doomed to death.

To survive in this nightmare and save human civilization can only be a hero with superhuman. The last hope of humanity rapidly agonizing - super-soldiers, clad in a unique futuristic Nanosuit second generation.
In terms of video Crysis is still considered the standard of computer games. Crysis 2 raises the bar even higher quality graphics: special attention is given to exploring the game landscape dilapidated New York.
With an improved artificial intelligence, virtual opponents are more coherent and reasonable, adequately responding to any actions of the player.
With various modifications player can improve Nanosuit and weapons directly in combat.

Multiplayer games
Twelve cards and seven modes, including team battle, to play together against virtual opponents, as well as battles in which every man for himself.
200 types of weapons and 32 for modification nanokostyuma.
140 trials, 80 titles, various medals, achievements and rankings.


\u003cdelivery\u003e The original copy of the key, the license agreement and all copies of the software in its original packaging, you can get a convenient way for you. To do this, after payment and receiving a digital copy of the key, please contact us by email or ICQ. For residents of Moscow and the delivery can be carried out by courier. Postage and packing, as well as courier services are paid separately by you. \u003c/delivery\u003e