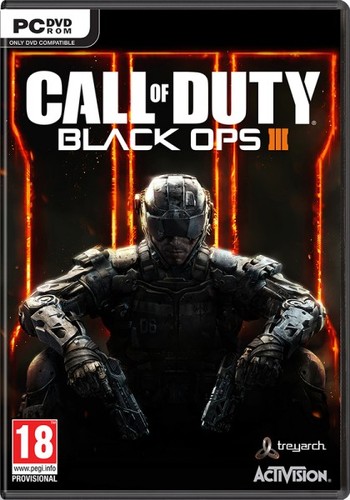 Mr.Iron information about the seller and his items
onlineAsk a question

This product is intended for distribution and operates on the territory of the Russian Federation, Belarus, Ukraine, Armenia, Azerbaijan, Georgia, Kazakhstan, Kyrgyzstan, Moldova, Tajikistan and Uzbekistan.

Description:
Call of Duty: Black Ops III combines 3 modes: campaign, online game and Zombie, showing fans the most exciting and ambitious game of the series. The campaign can be run alone or in a cooperative mode that supports up to 4 players. The network mode will be the most impressive in the series, thanks to new opportunities for increasing rank, personalization settings and preparation for battle. A mode of "Zombies" with its own storyline will give players a storm of thrills. Call of Duty: Black Ops III can be played by playing on the network or alone, and for the first time for both approaches developed its own system of pumping.
You are waiting for an incredible amount of innovations: stunning maps, weapons, abilities and the latest system of movement.

- Call of Duty: Black Ops III story campaign demonstrates a new approach to creating levels and is designed for passing the four of them together, which will give all participants a lot of impressive cinematic moments in the best Call of Duty traditions.
- Achieved thanks to modern technology, a significant increase in the level of levels will allow players to "get off the rails" - to act as freely and independently as possible.
- Each character can be customized to the player´s taste - from weapons and used ammunition to abilities and equipment - and the development system and individual arsenal will make every moment of the game unforgettable.
- The possibility of cybernetic modification of the characters significantly expands the range of character settings. Implants give soldiers access to both new skills and passive upgrades, providing new ways of moving and improving defensive capabilities.
- In Call of Duty: Black Ops III debuts a completely new system of movement. It will allow players to move swiftly and deftly, easily combining various movements and techniques without losing control of the weapon.
- Studio Tryearch presents nine new fighters available in multiplayer mode. Each of them has a unique appearance, personality, voice, as well as its own arsenal of weapons and skills. Each of the specialists, in addition to global growth in the level and improvement of weapon possession, can also increase their rank.
- Modification of weapons in Call of Duty: Black Ops III goes to a whole new level.
Call of Duty: Black Ops III returns to the popular zombie mode, which debuted in Call of Duty: World at War. In the new game fans waiting for a separate campaign Shadows of Evil - with its own storyline and full support for the system of recruitment experience.

Dear customers! We kindly request that if there are any problems with the purchased product, it does not immediately leave negative feedback. Write us a message in the correspondence (purchase page on the site Oplata.info). We will try to respond to your message as soon as possible and solve the problem promptly. It is noteworthy that the reason for exchanging or returning a purchased key (key) is that you must make an activation error, which can only be related to the purchase process and the attempt to activate it (a prerequisite is that the record should not contain signs of change).

Instructions on how to activate the Steam Key:

1. Install the Steam client http://steampowered.com/about (if not already installed).
2. Register a new account on Steam or go to the existing https://store.steampowered.com/login/
3. Open the Steam application on your PC and in the lower left corner select the item “Add game”, then “Activate on Steam”.
4. Enter the key.
4. After activation, the game will be displayed in the list of games that you can download at any place and at any time.